A downloadable game for Windows and macOS

(FULL DEMO AVAILABLE NOW!!)
In a far off past, the tension between the Humans and Animal races was at an all time high. While the issue of equality was claimed to have been solved, both races were waiting for any spark to start an all out civil war, and would find that spark in the universally adored pastime event: Boxing!
Play as Bullen Beisser, a rough new comer to the AKB League just looking for some good fights. Punch your way through 13 matches against some rather strange yet intimidating foes, with your sights set on being crowned "The King of the Ring". Unknown to Bullen, the world's racial conflict would soon all upon his shoulders, and the victories he achieved would quickly become a turning point of history. But, even so, through all the titles of hero and villain you are involuntarily given, your desire to fight must stay strong. Human or Animal, it doesn't matter what you are, you know in your heart that you have what it takes to become #1.

AKB (Animal Kingdom Boxing) is a boxing game inspired heavily by the Punch-Out!! series and Wade Hixon's Counter Punch, created with the intention of filling the hole of retro boxing games that's been missing for nearly 10 years. However, instead of cultural stereotypes, you fight animal stereotypes, myths, and folklore (that also are sometimes cultural stereoypes). Even though it's what one would call a "Punch-Out!! Clone", AKB boasts new gameplay mechanics and features, as well as combines the best of what made the Punch-Out series shine, such as:
-Ring Rotation when dodging, making the background and strategy against certain opponents more lively
-POW and Flurry Punches: Allows players to both use the Star Punch mechanic from Punch-Out!! NES/Wii, as well as the Flurry of punches from Super Punch-Out!!
-Counter Punches: Do a heavy hook or uppercut by pressing the action button while dodging or ducking. It's a more powerful punch, but may leave you open to attack!
-Stamina Bars: Similar to the hearts in NES and Wii, but in a more streamlined way! Your opponent now ALSO has a stamina bar, meaning you can't expect to get them dizzy just from one punch. There's many ways to drain the stamina bar, and this will be a major factor when fighting certain opponents.
-More Rounds, More Recovery: In real life, boxing has more than just 3 rounds, so depending on what circuit you're at a fight can last anywhere from 4-12 rounds! Both you and your opponent recover 1 knockdown when a new round begins, so don't rely too hard on waiting out the clock! Knock em' out!!
-Secret Fights and New Game+: There's more to be done after you beat the game, don't just settle for the crown, keep on fighting and looking for new opponents!

AKB: Underdog is actually a prequel to a game that was supposed to be in development titled "AKB: Southpaw", a game that shared the same gameplay but with visuals closer to Super Punch-Out, Punch-Out Wii, and Wade Hixon's Counter Punch. Southpaw's development was put on hold due to the Clickteam Fusion 2.5 engine not being able to handle the size of the animations made for the game, and thus is going through an engine change or will be be scaled down. In the meantime, I'm making Underdog to get the AKB experience in your hands, and tell a story I had originally intended to keep away for a while.

AKB: Underdog is windowed to be released Spring of 2019, with AKB: Southpaw coming within the next year or so. The final version of the game will be $5 USD.

For those of you wondering, the creator hasn’t updated his website or been activate around deviantart and FA since 2019. He is active around his Twitter, but he seems to have completely stopped mentioning AKB and AKB: Southpaw (another project of his). So yes, this has been abandoned along with Southpaw, and there will never be a release date, unfortunately. I really enjoyed this Demo and definitely would purchase the full thing if it ever came out, really sad to see a good project go to waste.

Is it safe to to assume this project is probably discontinued?

Liking the new demo but I feel the fight against Grand Ivory needs some work. There's times he's dealing damage with no (or a single frame) animation and others when I get back up he's getting a shot I don't have time to react as the ref gives the notice to resume the match. With him being the second match, he should be teaching players to read signals but not demolish him for misreads this early in the game, just a heavy penality.

Thanks for the input! I was worried Ivory may be a bit too hard for a second fight. He was originally intended to be the third fight, and as the creator it's hard for me to determine how hard a fight is from one or another since I know exactly how to time and beat all of them.

I think I'll be increasing the window in which he prepares a punch. He only has 3 punches, but their tell requires you to pay close attention, and admittedly most new players may need more time to process which punch he's throwing. As for the single frame hits, that's quite odd to hear. It's impossible for any opponent to do that. You may mean how his animation cuts off if he hits you right as the mid-punch animation plays, which is when the hit detection checks your input. In the case of Kid Clyde I did rework this by having one frame of the mid-punch animation be in the pre-punch animation, but in the end of the day it's all the same 3 frames when a hit will be detected.

If you're referring to when you're out of stamina, all opponent attacks are thrown faster, but this seems like a general issue that you're talking about. Giving more  time to read what he's going to do should hopefully make his fight much easier, as when you figure out how to beat him, much like the other opponents, he can be beaten pretty quickly.

I can see the elements of Ivory being the third fight in his between round conversations about beating Ducade.  One small non-game thing I noticed was Kidd Clyde has more KOs than wins & that would be impossible in boxing. His amount of KOs should be no more than his number of wins.

Sweet demo, can't wait for the full release and get KOed there. :)

Just out of curiosity but will the final version of the game have multiple pictures of your character with various forms of damage in between rounds so give a visual indication of how close you are to a KO much like in the original Punch Out?

Yes, but much like in the original Punchout games it will be very tame.

Why is the attack button bound to shift? Sticky keys are kinda a thing.

Oh, I kinda hadn't considered that since I always disable it immediately, good point. I should remap that. The controls were kind of a placeholder (Clickteam Fusion Default) until I could get the controller support down, but regardless I'll probably have to change it, likely to Z and X. 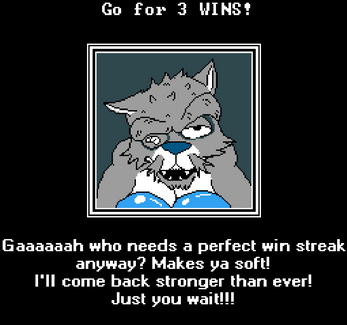 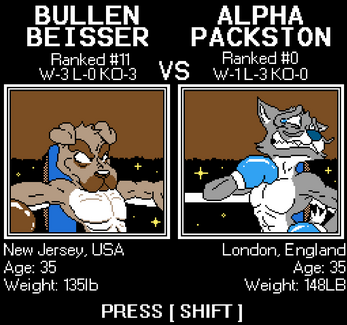 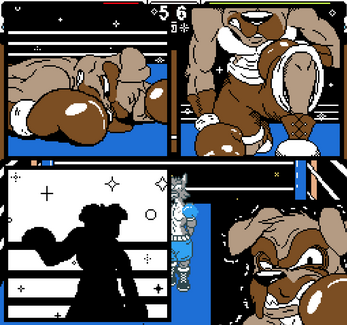 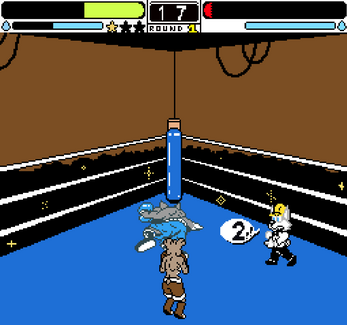 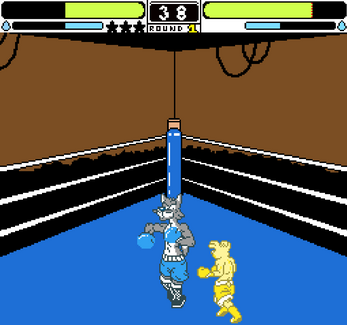 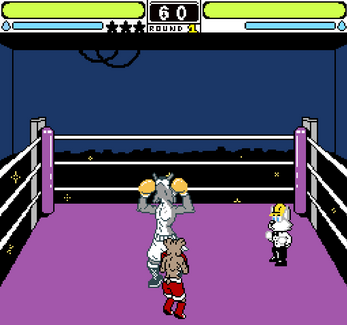 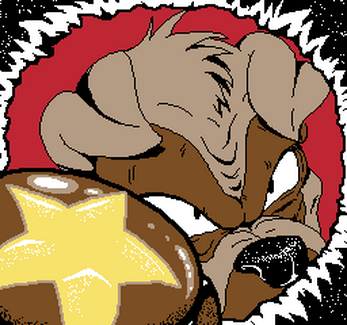 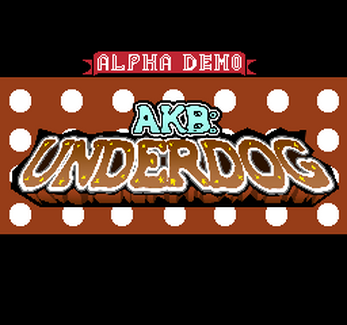